Why Did They Steal Summer?

When I grew up (now many years ago), summer was a time for playing games with my brothers and friends (often using our imaginations to create new challenges). It was a time for family vacations, often driving across country in the family station wagon. It was a time for cookouts with neighbors and catching fireflies after dark. For older kids, it was a time to take a summer job and earn a little money, and, more importantly, learn a little responsibility.

In the last 25 years ago, the powers that be have gradually and inexorably stolen summer as we knew it. Summer has been compressed and the school year expanded. One county in metropolitan Atlanta began school this year on July 31. Most other public schools in Atlanta are opening next week (August 7). Classes at the University of Georgia begin on August 14. Although there are surely pockets of resistance (Wisconsin), this trend seems to be prevalent across the U.S.

A lot of this seems to be driven by well meaning efforts to improve educational quality. However, as is so often the case with policies driven by politicians and academics, the results do not seem to be there. Correct me if I am wrong, but I have not noticed a massive increase in U.S. educational performance. In a more limited sense, many my students at the University of Georgia Law School (all academically gifted) seem to arrive with little appreciation of how the world works.

While the benefits of stealing summer are difficult to discern, the costs are clear. As one article recently reported, the percentage of teens with summer employment has dropped significantly (from 57 percent in 1986 to 36 percent). This is true even in the face of a shrinking unemployment numbers. It has likewise been reported that many students are unable to take advantage of summer fellowships and other programs that extend into August. Finally, summer vacation season has effectively been crammed into roughly six weeks (from June 15-July 31). This results in overcrowding at National Parks and other vacation destinations (who have difficulty maintaining staffing after roughly the middle of August).

Although there are concrete costs of the compressed summer season, there are intangible costs that I would argue are at least as important. Summer used to provide a time to get away from our scheduled existence, and to do something different. It provided a time to use the imagination--to contemplate the beauty of a sunrise or sunset--and to explore something outside of one's everyday existence. For kids, it was a time to dream of the future and what might be. Sure, summer can still be such a time, but in its current compressed form, its value is likewise compressed.

If someone asked me (and no one has), I would offer this simple formula: No school after Memorial day and before Labor Day. This would restore summer to its traditional place. Do I think this will happen? No, but it does appear that some are beginning to understand the costs of the shrinking summer season. Maybe there will at least be no further encroachment.

The photo is of a a meadow in front of Mt. Hood in Oregon on a magnificent summer day in late July. 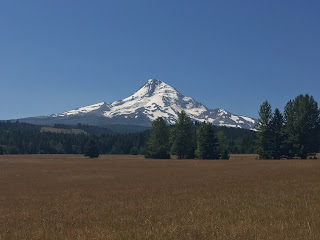 John L. Watkins
Athens, GA, GA, United States
I am a lawyer and mediator from Athens, Georgia. For most of my career, I practiced at large law firms in Atlanta. I started my career doing all types of civil litigation. Then I got into the area of business law, helping clients with supply contracts, non-disclosure agreements, terms and conditions and other contracts. Along the way, I handled a lot of insurance related claims. I also act as a mediator in commercial disputes. Today, my law practice mainly consists of assisting a select group of clients with commercial issues. I am available as a mediator, and also teach Insurance Law as an Adjunct Professor at the University of Georgia School of Law.